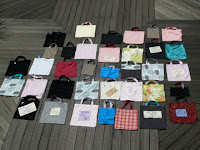 Camden FoE has always looked out for ways to engage people on the street in discussions about the environment, but often actions speak louder than words. So, when we wanted to challenge people’s use of plastic bags we wanted to offer a practical solution. We’re concerned about the use of these bags as they kill millions of animals, cause floods, fill the remaining landfill sites and litter cities, countryside and oceans alike.

We’ve been making bags from old material (old dresses, curtains, duvet covers, and a couple of Steve’s shirts) and giving them out on the street to encourage people to give up plastic bags for good. Today we gave out about 40 and got 50 plastic bags in return. 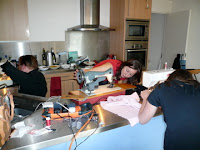 It was shocking to see the amount of plastic given out unnecessarily by shops – Woolworths had provided one shopper with 2 bags – 1 for a bottle of hair product and one for a (plastic-wrapped) birthday card.

Unfortunately we can’t make people never use plastic again, but we will have got people thinking about why they should avoid using them, and everyone we asked agreed that there should be a ban or a tax on bags to help reduce their use.

– In the UK we use an average of 290 bags a year, and 1.2 trillion are used worldwide
– On average we use each bag for about 12 minutes before disposing of them
– Ireland’s 15p PlasTax has resulted in a 90% reduction in use of plastic bags since its introduction in 2002
– In 2002 Bangladesh became the first country to ban plastic bags. A movement against them began in the 1980s in Dhaka, where bags were found to clog drains in the monsoon rains, causing flooding. Since then plastic bags have been banned in countries such as Rwanda, Tanzania and in the UK they’ve been banned from Modbury (Devon). 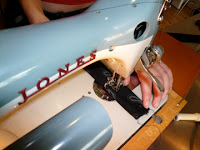 Supermarkets are saying that they will cut usage, but so far we’ve seen very little meaningful action. It is not enough to have the odd plastic-free day, and bags for life are still made of plastic. In fact, the plastic bag industry are using the harm done by these longer-lasting bags as a way of arguing against the implementation of a tax on plastic bags in the UK. As for promises regarding the introduction of degradable bags – consumers need to be aware that ‘degradable’ bags are not the same as biodegradable. They break down into smaller and smaller pieces which contaminate earth, waterways and oceans. 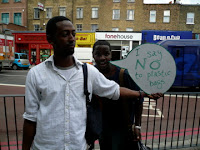 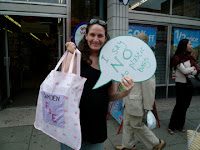 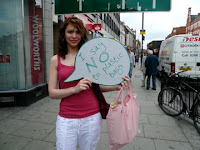 Some of our happy customers saying ‘No’ to plastic bags

If you want to make your own bag go to www.morsbags.com, even better make one for a friend as well. We were surprised how much we’ve enjoyed this project – working together to make these bags has resulted in some group members learning new skills, a lot of laughs, and some great job satisfaction. But if sewing really isn’t your bag (pun completely intended) you can get really useful bags at www.onyabags.co.uk or something a bit more glamorous at Cheeky Leopard.