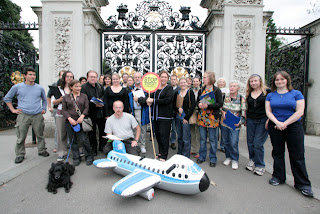 Last weekend members of Camden FOE joined with Greenpeace, WDM, and the National Trust to ask West London residents for their views on the expansion of Heathrow airport.

As thousands of people gathered at the nearby Climate Camp we wanted to back up their action with evidence of local opinion. A thousand people were questioned, and the results of the poll showed:
– over 95% supported government action to make rail travel a more affordable, easy, and pleasant alternative to air travel within the UK;
– 62% opposed the expansion of Heathrow, with only 24% in favour of the plans (14% were unsure);
– 64% would be willing to holiday more in the UK than abroad to protect their local area from airport expansion, and help combat climate change

Polling was being conducted at locations across West London, including Richmond, Kew, Ealing Broadway, Houslow and Osterley Park: a historic National Trust house, green space and recreational resource for local people., already blighted by aircraft noise and pollution.  Sarah Kramer, MP for Richmond Park was presented with the results at Kew Gardens following polling (pictured). She told us how frustrating it was trying to make her constituents’ opposition heard – BAA won’t even attend a public meeting to hear their concerns.

Steve Huxton, a volunteer for Camden Friends of the Earth, who assisted with carrying out the poll said “The results of this poll show that people are prepared to change their own travel habits in order to protect the environment, preserve green spaces and tackle climate change.  Government policy needs to catch up with public opinion and  abandon plans for expanding aviation, instead focusing on providing viable alternatives for people’s travel needs.”

Learn more about the issues at http://www.foe.co.uk/campaigns/transport/case_studies/heathrow.html