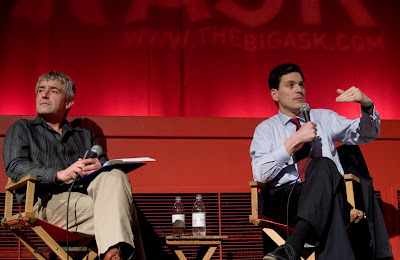 This week saw the launch of a series of screenings of ‘An Inconvenient Truth’, attended by ‘leading’ politicians, campaigners and businesses. The launch night was attended by David Miliband MP, Sec of State for the Environment as well as most of DEFRA, a lot of MPs’ researchers, and journalists alongside us mere citizens.

Camden FoE members went along to collect support for the inclusion of annual targets in the upcoming Climate Change Bill. Our favourite exchange of the night was the statement by a Financial Times reporter that she didn’t believe in annual targets for carbon emission reduction. Graeme’s response was to ask her if she had questioned the validity of targets for inflation. I don’t believe she was able to give a response to that.

On a more depressing note, there was little sign of meaningful action from the Government. David Miliband gave good green chat – but can’t phase out incandescent lightbulbs, thinks taxes will get people out of gas-guzzlers and isn’t questioning the UK’s road-building and aviation policies. He’s blogged about the night, examining the selection of 60% as a target for carbon emission reductions. It appears he recognises that this isn’t enough, but if he can’t get people to change their lightbulbs, how are we even going to get there?

Future screenings will be attended by David Cameron and Menzies Campbell, keep an eye on the Prince Charles cinema website for more details.